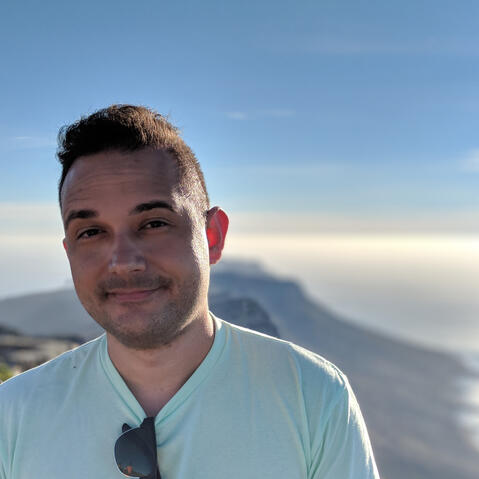 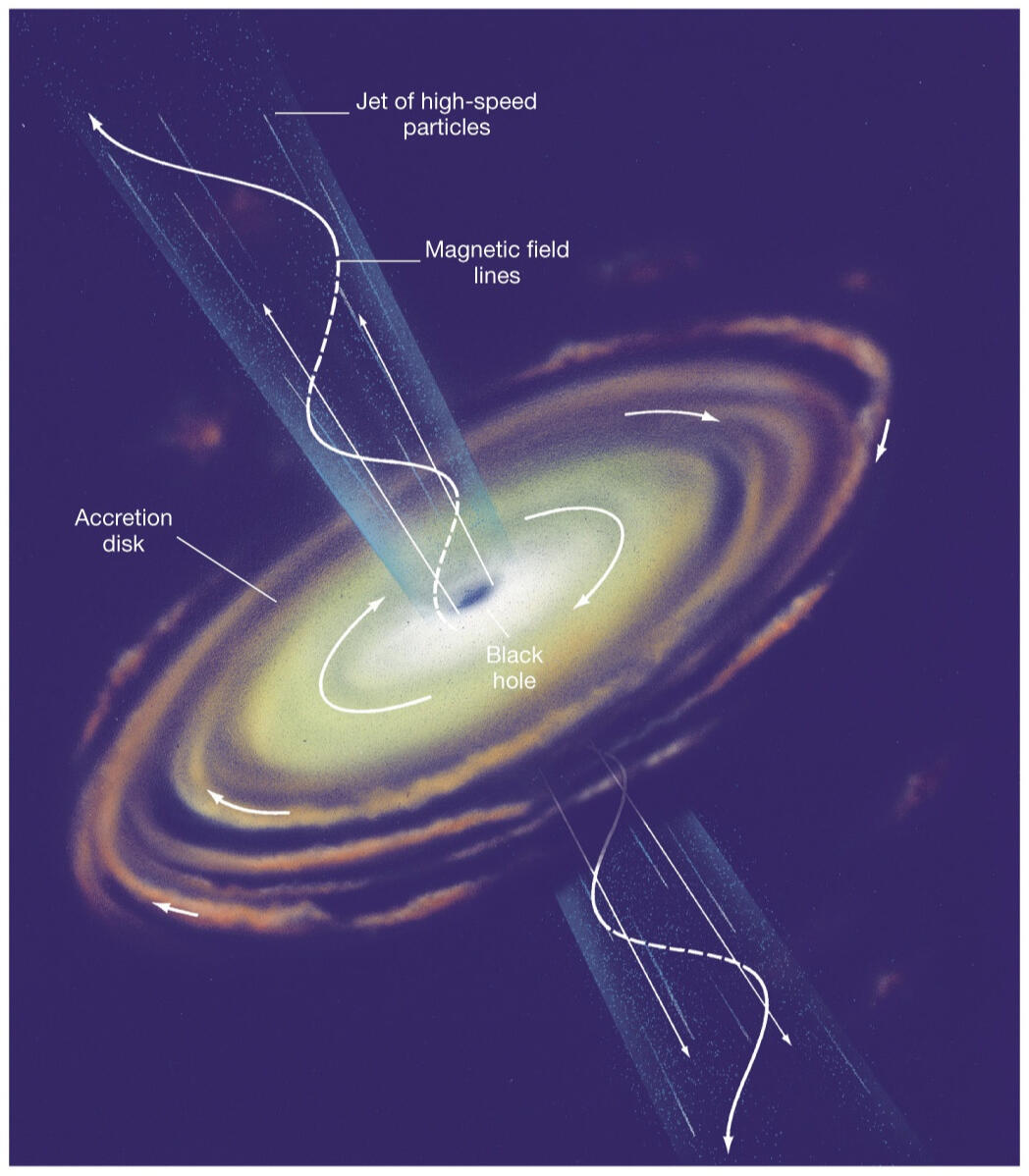 Illustration of an AGN that is launching a relativistic jet.

This project used new observations from the Hubble Space Telescope and the Chandra X-ray Observatory to determine the emission mechanism responsible for the excess X-ray flux in the jet. The 3C 111 jet is one of the longest known in terms of angular size — two arcminutes on the approaching side. This, combined with its relatively straight nature, makes it ideal for studying the evolution of jet physics along its length. We used a combination of photometric, spectroscopic, and modeling analyses to rule out the inverse-Comptonization of CMB photons as the dominant mechanism responsible for the observed X-ray flux in the jet. Instead, we favor a two-component synchrotron model wherein some population of electrons is accelerated to high enough energies that they emit significant X-ray flux.

Full results published in The Astrophysical Journal (Clautice et al. 2016). This project was the topic of my Master's thesis. As a result of this project, we were awarded follow-up observations using Hubble, Chandra, and NuSTAR. These new data will allow us to better constrain the nature of high-energy jet emission as well as probe other aspects of FR II jet physics. 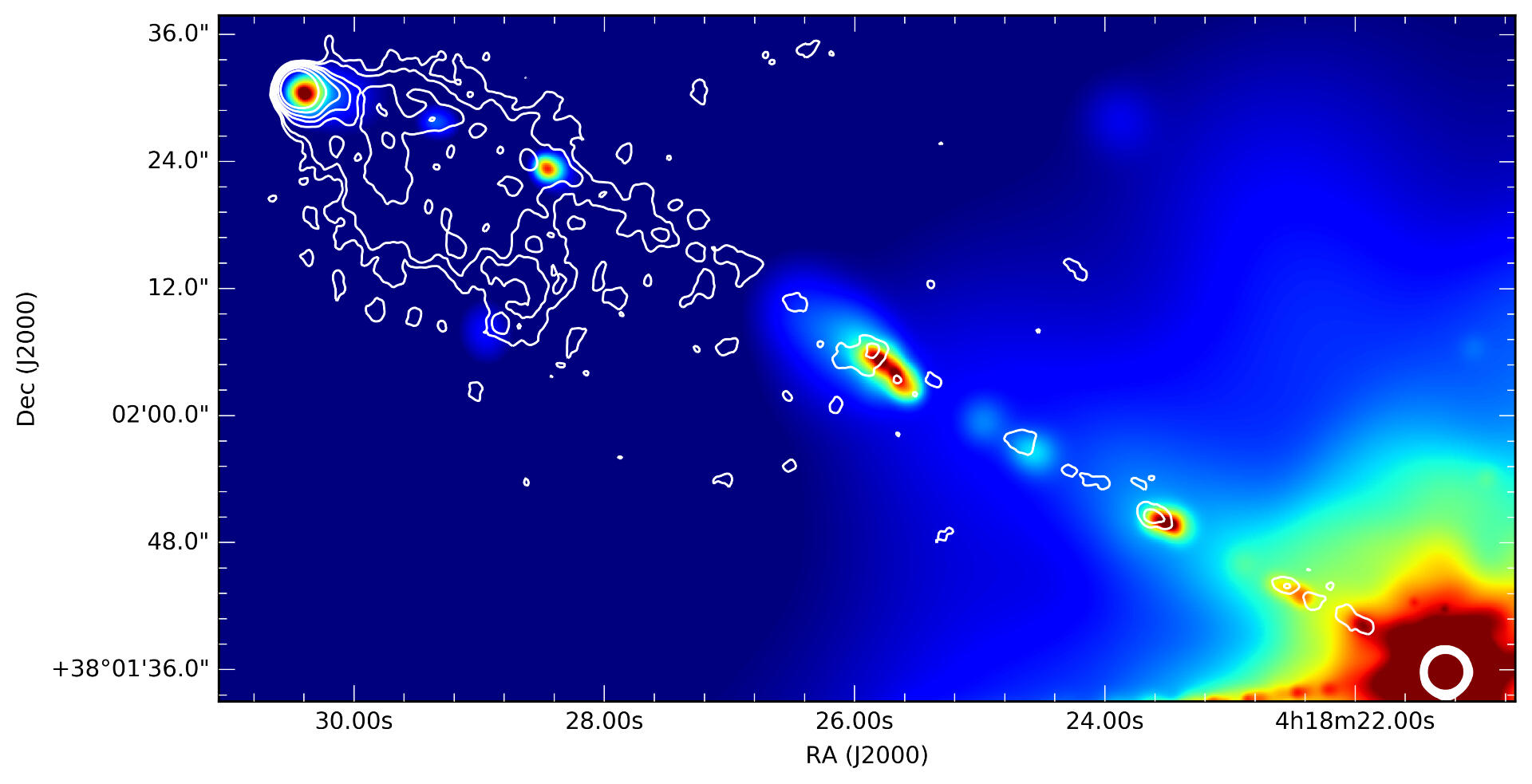 This project is ongoing and will comprise the bulk of my PhD dissertation. We have obtained new optical polarimetry observations using the Hubble Space Telescope for three key FR II jets (3C 273, PKS 0637-752, and 1150+497). To date, high-quality Hubble polarimetry has been taken for just one FR II jet (PKS 1136-135). This project will quadruple the sample of FR II jets for which there is high-quality optical polarimetry, bringing our understanding of their unique physics more in line (and likely more in contrast to) that of the FR Is.

Whereas the FR I jet emission is representative of a single electron energy distribution, the emission from FR II jets has been shown to require a second emission component, with recent results favoring that of a second high-energy electron population (e.g., 3C 111). In some FR II jets (such as 3C 273), the optical emission is part of this high-energy component, and thus optical polarimetry can be used to probe the nature of the highly-efficient particle acceleration demanded within these jets. This can be done by tracking the fractional polarization and angle as each emission region propagates downstream, as well as comparison with flux and spectral maps, as has been done with M87.

I am an Astrophysics PhD student in the Department of Physics and Space Sciences at the Florida Institute of Technology in Melbourne, FL. My research involves multi-wavelength observations of relativistic jets from active galactic nuclei, probing the nature of high-energy jet emission. My advisor is Professor Eric Perlman. I completed my M.Sc. degree in Fall 2016 with a thesis titled "The Kinematics and X-ray Emission Mechanism of the Large-Scale Jet of 3C 111."

Prior to that, I attained Bachelor of Science degrees in Physics and Mathematics from the University of Central Florida. My research at the time was on the composition of asteroids and comets under the direction of Professor Humberto Campins.

I plan to pursue a career in Data Science once my PhD is complete.

Some pictures from my trip to visit the National Radio Astronomy Observatory (NRAO) in Socorro, NM and the Very Large Array (VLA), the world's most versatile and productive radio telescope.

This artist’s impression shows how ULAS J1120+0641, a very distant quasar powered by a black hole with a mass two billion times that of the Sun, may have looked. This quasar is the most distant yet found and is seen as it was just 770 million years after the Big Bang. This object is by far the brightest object yet-discovered in the early Universe. Credit: ESO/M. Kornmesser.